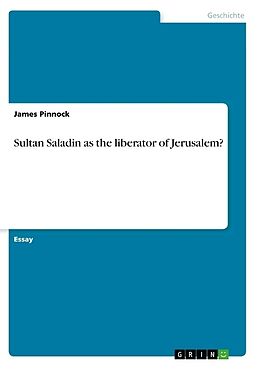 Sultan Saladin as the liberator of Jerusalem?

Essay aus dem Jahr 2010 im Fachbereich Geschichte - Weltgeschichte - Allgemeines / Vergleiche, , Sprache: Deutsch, Abstract: It is, according to A. R. Azzam, only "by putting Jerusalem aside [that] we can catch a glimpse of the real Saladin". Should we therefore, as Andrew Ehrenkreutz suggests, question whether history would view Saladin in the same manner if he had died in 1185, or does this unduly undermine the historical importance of events in 1187? Even in its centrality to Saladin's career and legacy, Hattin represents just one of many of Saladin's notable achievements: "The liberator of Jerusalem, a chivalrous knight, a generous benefactor, [and] a political upstart".

There are evidently a multitude of mediums in which one can interpret Saladin's career and achievements: his contemporary chroniclers saw him as the champion of Muslim holy war, with the pinnacle of his career arriving with his victory at Hattin; A. R. Azzam sees Saladin's defining success in the context of the Sunni Revival, and suggests his greatest achievement was the restoration of Sunni Islam into Fatimid Egypt; others, such as Ehrenkreutz and Tyerman, see Saladin as a scheming politician seeking personal aggrandizement who manipulated the "fluidity and opportunities" of Near Eastern politics in the twelfth century.

This essay will firstly examine the chronicles of Imad al-Din al-Isfahani and Baha ad-Din Ibn Shaddad, which establish jihad and the Counter-Crusade as the most important aspect of Saladin's career, as do the majority of modern historians. However, by shifting the focus away from Hattin and Jerusalem, from the Dar al-Harb towards the Dar al-Islam, and furthermore by examining the less laudatory assessments of Saladin, this essay will attempt to reach a more balanced and extensive assessment of Saladin's achievements.

Titel
Sultan Saladin as the liberator of Jerusalem?