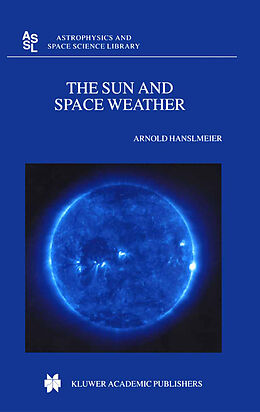 The Sun and Space Weather

Since the Sun is the main source of space weather effects, the first part of the book is devoted to a general introduction to the physics of the Sun. A better understanding of the phenomena underlying solar activity is also important for prediction of solar outbursts and thus for establishing alert systems for space missions and telecommunication systems. The book contains the following topics:

In the cited literature more detailed information about the topics may be found.

This book provides an introduction and overview of modern solar-terrestrial physics for students as well as for researchers in the field of astrophysics, solar physics, geophysics, and climate research.

1. Introduction, What is Space Weather? 2. The Sun as a Star. 3. Observing the Sun. 4. Phenomenology of Solar Active Regions. 5. Testing the Solar Interior. 6. MHD and the Solar Dynamo. 7. The Sun and Climate. 8. Space Weather and Radiation Damage. 9. The Ionosphere and Space Weather. 10. The NOAA Space Weather Scales. 11. Asteroids, Comets, Meteorites. 12. Space Debris. 13. Appendix. List of tables. List of figures.

Titel
The Sun and Space Weather