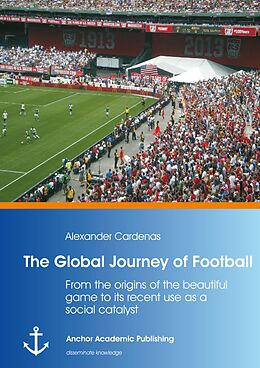 The Global Journey of Football: From the origins of the beautiful game to its...

Football's consolidation as the world's most popular sport is the result of both the inherent attributes of the game, that is, its simplicity and universality, as well as the historical processes that have contributed to the expansion of this sport throughout time. Although the game has undergone very little structural transformation in the last decades, one of most notable developments in the world of football has taken place in the new application of the sport as a tool for social change. This has generated a true global social movement encompassing a multitude of actors such as national governments, the private sector, international organizations and NGOs, around the issue of development and peace through sport. With this background, the purpose of this book is two-fold: 1) Provide an overview of the history, evolution and global expansion of football, 2) bring to light the recent transformation experienced by the game as a social movement and as an agent of community change. This part includes the grassroots project "Goals for Peace" in Colombia and the Philippines, which aims at assessing the ways and extent to which this sport can be a transformative tool.

Alexander Cárdenas completed an MA in Global Studies at the Universities of Vienna, Austria and Leipzig, Germany. He has played football at a competitive level in Colombia and the US, and has an extensive collection of football items. He is currently invo

Titel
The Global Journey of Football: From the origins of the beautiful game to its...