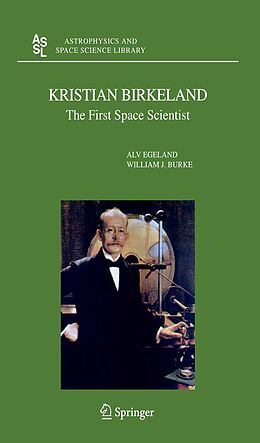 This biography conveys the life and accomplishments of a Norwegian hero to the English speaking world, illustrating the beginnings of collaboration between science and industry. It shows how work in a small country laid the foundation for the green revolution.

At the beginning of the 20th century Kristian Birkeland (1867-1917), a Norwegian scientist of insatiable curiosity, addressed questions that had vexed European scientists for centuries. Why do the northern lights appear overhead when the Earth's magnetic field is disturbed? How are magnetic storms connected to disturbances on the Sun? To answer these questions Birkeland interpreted his advance laboratory simulations and daring campaigns in the Arctic wilderness in the light of Maxwell's newly discovered laws of electricity and magnetism. Birkeland's ideas were dismissed for decades, only to be vindicated when satellites could fly above the Earth's atmosphere.

Faced with the depleting stocks of Chilean saltpeter and the consequent prospect of mass starvation, Birkeland showed his practical side, inventing the first industrial scale method to extract nitrogen-based fertilizers from the air. Norsk Hydro, one of modern Norway's largest industries, stands as a living tribute to his genius.

Hoping to demonstrate what we now call the solar wind, Birkeland moved to Egypt in 1913. Isolated from his friends by the Great War, Birkeland yearned to celebrate his 50th birthday in Norway. The only safe passage home, via the Far East, brought him to Tokyo where in the late spring of 1917 he passed away.