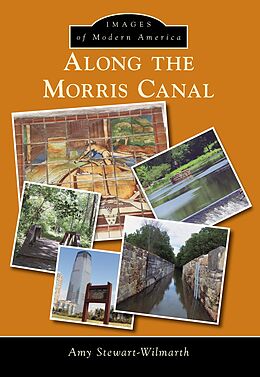 Along the Morris Canal

Dug by hardworking men in the late 1820s, the Morris Canal is considered to be an engineering marvel. Comprised of 34 locks and 23 inclined planes, it created a waterway from the Delaware River in Phillipsburg, across northern New Jersey, and down into the Hudson River in Jersey City. It was drained in 1924, with its prisms mostly filled in. The 1960s brought a steadfast movement for the preservation of the largely buried Morris Canal, including the historic Silas Riggs Saltbox House being rescued from demolition and later the opening of the restored Waterloo Village. These challenging years set in motion the formation of organizations and societies dedicated to protecting, restoring, and preserving the Morris Canal. Through the persistent efforts and dedication of historians, canal enthusiasts, and neighboring communities, the Morris Canal and its buried history are gradually being unearthed. This book captures the Morris Canal,s original pathway and its restoration and preservation accomplishments.

Titel
Along the Morris Canal