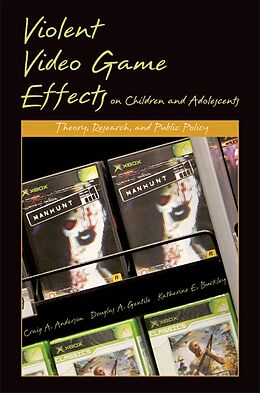 Developmental scientists have been concerned about the effects of violent video games on children and adolescents for decades. This concern has led to a phenomenal amount of high-quality research and sophisticated theories that have allowed several specific testable hypotheses to be formulated about the potential short-term and long-term effects of these games. In the proposed volume, the authors use the General Aggression Model (GAM) as a basis for explaining and predicting effects and changes in aggression related to exposure to violent video games. They also describe how a developmental risk and resilience model can be integrated into GAM to enhance our ability to predict long-term changes based on violent media exposure in conjunction with other risk factors for aggression. The authors conclude that playing violent video games is, indeed, a risk factor for aggressive behaviour regardless of sex, age, or prior aggressive behaviour.

Zusammenfassung
Violent video games are successfully marketed to and easily obtained by children and adolescents. Even the U.S. government distributes one such game, America's Army, through both the internet and its recruiting offices. Is there any scientific evidence to support the claims that violent games contribute to aggressive and violent behavior?As the first book to unite empirical research on and public policy options for violent video games, Violent Video Game Effects on Children and Adolescents will be an invaluable resource for student and professional researchers in social and developmental psychology and media studies.