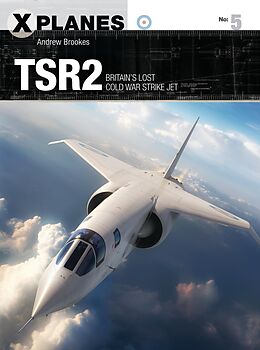 The TSR2 is one of the greatest 'what-if' aircraft of the Cold War, whose cancellation still generates anger and controversy among aviation fans. It was a magnificent, cutting-edge aircraft, one of the most striking of the Cold War, but fell victim to cost overruns, overambitious requirements, and politics. Its scrapping marked the point when Britain's aerospace industry could no longer build world-class aircraft independently. After the demise of TSR2 the RAF's future jets would be modified US aircraft like the Phantom and pan-European collaborations like Tornado and Typhoon.

In this book the eminent air power analyst and ex-Vulcan bomber pilot Andrew Brookes takes a fresh, hard-headed look at the TSR2 project, telling the story of its development, short career and cancellation, and evaluating how it would have performed in Cold War strike roles as well as in the recent wars in the Middle East.

Andrew Brookes completed RAF pilot training after graduating from Leeds University. Following reconnaissance and strike tours on Victors, Canberras and Vulcans he joined the tri-service policy and plans staff of Commander British Forces, Hong Kong. After being in charge of the multi-engine, helicopter and flying training desks in the RAF Inspectorate of Flight Safety, he was appointed as the last operational RAF Commander at the Greenham Common cruise missile base. He studied International Relations at Downing College, Cambridge, before becoming a Group Director at the RAF Advanced Staff College. From 1999 to 2009 he was Aerospace specialist at the International Institute for Strategic Studies.
Andrew is now Chief Executive of the Air League. He publishes and broadcasts widely. He received the Defence Aerospace Journalist of the Year Award in 2004 and 2006. In 2009 he was awarded the C P Robertson Memorial Trophy for the best interpretation of the Royal Air Force to the public. His 18th aviation book, Canberra Boys, was published in 2017.
He is a Liveryman of the Honourable Company of Air Pilots, a Fellow of the Royal Aeronautical Society and a Fellow of the Royal United Services Institute. He is chairman of the Independent Defence Media Association and he still has a private pilot's licence.