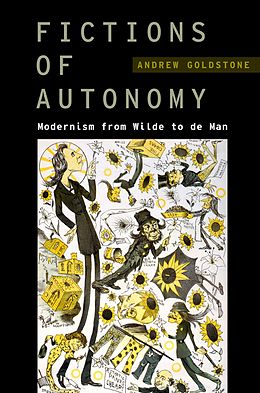 No aspect of modernist literature has attracted more passionate defenses, or more furious denunciations, than its affinity for the idea of autonomy. A belief in art as a law unto itself is central to the work of many writers from the late nineteenth century to the present. But is this belief just a way of denying art's social contexts, its roots in the lives of its creators, its political and ethical obligations? Fictions of Autonomy argues that the concept of autonomy is, on the contrary, essential for understanding modernism historically. Disputing the prevailing skepticism about autonomy, Andrew Goldstone shows that the pursuit of relative independence within society is modernism's distinctive way of relating to its contexts. Modernist autonomy is grounded in connections to servants and audiences, aging bodies and wardrobe choices; it joins T.S. Eliot to Adorno as exponents of late style and Djuna Barnes to Joyce as anti-communal cosmopolitans. Autonomy reveals new affinities across an expansive modernist field from Henry James and Proust to Stevens and de Man. Drawing on Bourdieu's sociology, formalist reading, and historical contextualization, this book shows autonomy's range--and its limitations--as a modernist mode of social practice. Nothing less than an argument for a wholesale revision of the assumptions of modernist studies, Fictions of Autonomy is also an intervention in literary theory. This book shows why anyone interested in literary history, the sociology of culture, and aesthetics needs to take account of the social, stylistic, and political significance of the problem, and the potential, of autonomy.

Andrew Goldstone is Assistant Professor of English at Rutgers University.

Contents Series Editors' Foreword Acknowledgments Introduction An institutional approach Aesthetic autonomy in practice and in philosophy Thee fictions of autonomy and their themes Modernist studies and the expanded field Autonomy from Labor In Service to Art for Art's Sake from Wilde to Proust Aesthetic autonomy? Our servants will do that for us Wilde: the truth of masks with manners Huysmans: the decadent master-servant dialectic Henry James: the subtlety of service Proust: service in the magic circle Aestheticist self-consciousness Autonomy from the Person Impersonality and Lateness in Eliot and Adorno Adorno's theory of impersonality Eliot's late style, 1910-1958 Four Quartets and musical lateness The late style and the intentional fallacy Expatriation as Autonomy Djuna Barnes, James Joyce, and Aesthetic Cosmopolitanism Nightwood: the luminous deterioration of cosmopolitanism French nights and the artist's lifestyle Wandering Jews, wandering Americans "Vagaries Malicieux": losing all connection at the Deux Magots Stephen Dedalus's hat Literature without External Reference Tautology in Wallace Stevens and Paul de Man The aesthete is the aesthete The Academy of Fine Ideas: Stevens and de Man in the university De Man, modernism, and the correspondence theory The sound of autonomy The plain sense of tautology Epilogue: Autonomy Now Autonomy, literary study, and knowledge production Autonomy abroad: proliferation on the world stage The truth about fictions of autonomy Index