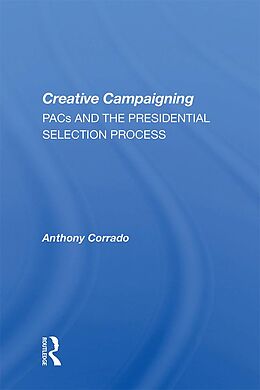 Ronald Reagan started it, back in 1977. George Bush perfected the art in 1988. In the 1980s and 1990s, Democrats as well as Republicans running for president (or thinking of doing so), have followed Reagan's lead in establishing precandidacy PACs as a way of raising more money faster, without the regulatory rigors laid down by Congress and the Federal Election Commission. Marshalling years of experience on the campaign trail, Anthony Corrado has documented for the first time the fundraising and spending patterns of presidential candidates who feel forced to circumvent the system in order to amass enough funds to mount a contemporary presidential campaign. He shows how a variety of factors-contribution limits, the delegate selection process, expenditure ceilings, and costly campaign strategies-have combined to push candidates to establish PACs to raise and spend money on campaign activities well in advance of an official declaration to run. These lofty-sounding organizations-such as Bush's "Fund for America's Future" and Gephardt's "Effective Government Committee"-operate as "shadow campaigns" throughout the nomination process and often live on beyond the candidate's formal bid for office. The year 1992 is a special case in presidential election year history because of the strong Bush incumbency, a reluctant Democratic challenge, and a series of foreign policy crises. Corrado explains why precandidacy PACs persist and how they are likely to grow (in number and clout) if an array of bold new reform measures is not implemented prior to the next open presidential election in 1996. After showing how the Federal Election Campaign Act not only permits but in fact inspires presidential candidates to break the laws governing campaign finance, Corrado points out how, ironically, less regulation may yield greater compliance and a more effective nomination process in the 1990s and beyond.