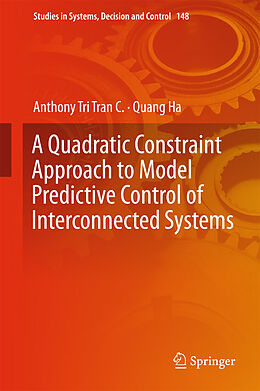 A Quadratic Constraint Approach to Model Predictive Control of Interconnected...

This book focuses on the stabilization and model predictive control of interconnected systems with mixed connection configurations. It introduces the concept of dissipation-based quadratic constraint for developing attractivity assurance methods for interconnected systems. In order to develop these methods, distributed and decentralized architectures are employed, whereby the communication between subsystems is fully connected, partially connected, or completely disconnected. Given that the control inputs are entirely or partially decoupled between subsystems and no additional constraints are imposed on the interactive variables beyond the coupling constraint itself, the proposed approaches can be used with various types of systems and applications. Further, the book describes how the effects of coupling delays and data losses in device networks are resolved. From a practical perspective, the innovations presented are of benefit in applications in a broad range of fields, including the process and manufacturing industries, networked robotics, and network-centric systems such as chemical process systems, power systems, telecommunication networks, transportation networks, and, no less importantly, supply chain automation.

Anthony Tri Tran C. has been an electrical and control systems engineer in Australia, Europe, and Vietnam for over 15 years, holding the lead and consultant positions in multinational corporations. He has been a TÜV-certified functional safety engineer from 2004 to 2014. Dr Tran received his master's degree in Information Technology Studies from the University of Queensland, Australia, and his Ph.D. in Engineering from University of Technology, Sydney, Australia, in 2002 and 2011, respectively. Dr Tran received his B.E. degree from the Vietnam National University in 1993 with university medal. He is currently a senior research fellow and lecturer at Cambridge Centre for Advanced Research and Education in Singapore (CARES) and Nanyang Technological University. His current research interests include systems and control, optimization applications, robotics, ubiquitous computing, reliable computerized-control systems and networks, emerging power systems and smart grids. Dr Tran is a member of the IEEE and member of Engineers Australia.

Quang Ha received the B.E. degree from Ho Chi Minh City University of Technology, Vietnam, the PhD degree from Moscow Power Engineering Institute, Russia, and the PhD degree from the University of Tasmania, Australia, in 1983, 1993 and 1997, respectively. He is currently an associate professor at the School of Electrical and Data Engineering, University of Technology Sydney, Australia. His research interests include automation, control, robotics and construction automation. Dr Ha is a senior member of the IEEE and member of the board of directors of the International Association for Automation and Robotics in Construction. He was an associate editor for IEEE Transactions on Automation Science and Engineering (2009-2013) and is currently on the editorial board of Automation in Construction, Mathematical Problems in Engineering and the International Journal of Automation and Control. He was recipient of 14 best paper awards from the IEEE, IAARC and Engineers Australia, including the 2015 Sir George Julius Medal.