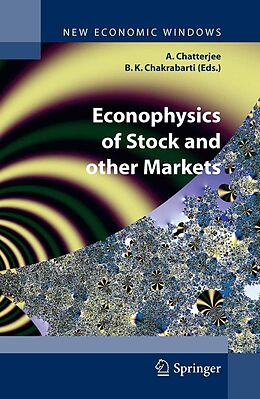 Econophysics of Stock and other Markets

Successful or not, we all (have to?) go to various markets and participate in their activities. Yet, solittle is understoodabout their functionings. E orts to model various markets are now substantial. Econophysicists have also come up recently with several innovative models and their analyses. This book is a proceedings of the International Workshop on \Eco- physics of StockMarkets and Minority Games",heldinKolkataduringFeb- ary 14-17, 2006, under the auspices of the Centre for Applied Mathem- ics and Computational Science, Saha Institute of Nuclear Physics, Kolkata. This is the second event in the Econophys-Kolkata series of meetings; the Econophys-Kolkata I was held in March 2005 (Proceedings: Econophysics of Wealth Distributions, published in the same New Economic Windows series by Springer, Milan in 2005). We understand from the enthusiastic response of the participants that the one-day trip to the Sunderbans (Tiger Reserve; a world heritage point) along with the lecture-sessions on the vessel had been hugely enjoyable and successful. The concluding session had again very lively discussions on the workshop topics as well as on econophysics in general, i- tiated by J. Barkley Rosser, Matteo Marsili, Rosario Mantegna and Robin Stinchcombe (Chair). We plan to hold the next meeting in this series, on \Econophysics and Sociophysics: Debates on Complexity Issues in Economics and Sociology" early next year. We are very happy that several leading economists and physicists engaged intheserecentdevelopmentsintheeconophysicsofmarkets,theiranalysisand modellingcouldcomeandparticipate.

This book reviews the latest econophysics researches on the fluctuations in stock, forex and other markets. The statistical modeling of markets, using various agent-based game theoretical approaches, and their scaling analysis have been discussed.

The leading researchers in these fields have reported on their recent work and also reviewed the contemporary literature. Some historical perspectives as well as some comments and debates on recent issues in econophysics research have also been included.

Titel
Econophysics of Stock and other Markets