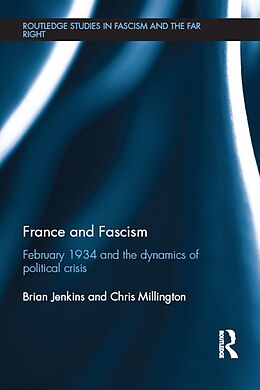 France and Fascism: February 1934 and the Dynamics of Political Crisis is the first English-language book to examine the most significant political event in interwar France: the Paris riots of February 1934. On 6 February 1934, thousands of fascist rioters almost succeeded in bringing down the French democratic regime. The violence prompted the polarisation of French politics as hundreds of thousands of French citizens joined extreme right-wing paramilitary leagues or the left-wing Popular Front coalition. This 'French civil war', the first shots of which were fired in February 1934, would come to an end only at the Liberation of France ten years later.

The book challenges the assumption that the riots did not pose a serious threat to French democracy by providing a more balanced historical contextualisation of the events. Each chapter follows a distinctive analytical framework, incorporating the latest research in the field on French interwar politics as well as important new investigations into political violence and the dynamics of political crisis.

With a direct focus on the actual processes of the unfolding political crisis and the dynamics of the riots themselves, France and Fascism offers a comprehensive analysis which will be of interest to undergraduate and postgraduate students, as well as scholars, in the areas of French history and politics, and fascism and the far right.

Brian Jenkins, now retired, was most recently Senior Research Fellow at the University of Leeds.

Chris Millington is Lecturer in History at Swansea University.

Untertitel
February 1934 and the Dynamics of Political Crisis