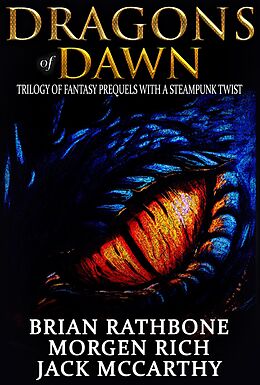 Dragons of Dawn (The World of Godsland, #1)

This bundle contains three novels that are prequels to the World of Godsland fantasy series. This is a great place to start the series or to continue the adventure.

Dragon Airways - Lured by ancient magic, a boy with special needs and unusual talents becomes valuable to both sides of the war. Fleeing those sent to capture him, he and his sister board Dragon Airways.

Ascension - Having reached the age of decision, Gwendolin Ahlgren finds she has no viable choices, or at least none her family will agree to let her pursue. She's resigned that her life will be anything but what she'd hoped it would be. When a traveling circus passes through her village, a fortune teller predicts a mysterious destiny Gwen could never have imagined and roundly rejects. Against her will, she leaves home for life in a monastery and meets the love of her life. Life and love aren't always what one expects, and neither is destiny. Gwen will have to stretch beyond herself and understand the true meaning of love if she's to fulfill her destiny through a task that only an unimaginable ascension can accomplish.

Onin - Joining the King's Guard is something every kid growing up in the Midlands dreams about. Onin never dared imagine such a life for himself, even after distinguishing himself in battle. When offered a rare opportunity to train within the Heights, he must balance honor, duty, and family. Haunted by persistent dreams and lured by the possibility of becoming a member of the guard, Onin leaves his home and the last vestiges of childhood behind. Follow the story of one of the most beloved characters from the World of Godsland fantasy series in the first installment of the Protector trilogy.

Titel
Dragons of Dawn (The World of Godsland, #1)