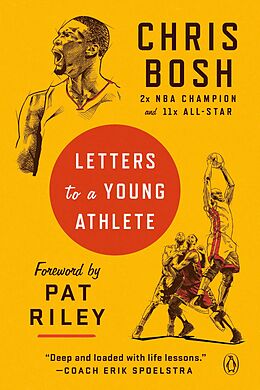 Letters to a Young Athlete

A legendary NBA player shares his remarkable story, infused with hard-earned wisdom about the journey to self-mastery from a life at the highest level of professional sports

Chris Bosh, NBA Hall of Famer, eleven-time All-Star, two-time NBA champion, Olympic gold medalist, and the league's Global Ambassador, had his playing days cut short at their prime by a freak medical condition. His extraordinary career ended not at a time of his choosing but "in a doctor's office in the middle of the afternoon." Forced to reckon with how to find meaning to carry forward, he found himself looking back over his path, from a teenager in Dallas who balanced basketball with the high school robotics club to the pinnacle of the NBA and beyond.

Reflecting on all he learned from a long list of basketball legends, from LeBron and Kobe to Pat Riley and Coach K, he saw that his important lessons weren't about basketball so much as the inner game of success-right attitude, right commitment, right flow within a team. Now he shares that journey, giving us a fascinating view from the inside of what greatness feels like and what it takes, formulated as a series of letters to younger people coming up and to all wisdom seekers. A timeless gift for anyone in pursuit of excellence, Letters to a Young Athlete offers a proven path for taming your inner voice and making it your ally, through the challenges of failure and the challenges of success alike.

Chris Bosh fell in love with basketball at an early age and earned the prestigious "Mr. Basketball" title while still at Lincoln High School in Dallas, Texas. A McDonald's All-American, Bosh was selected fourth overall by the Toronto Raptors after one year attending Georgia Tech. In March 2019, Bosh's #1 jersey was officially retired for the Miami Heat, and he was inducted into the Naismith Memorial Basketball Hall of Fame in 2021. In addition to his basketball career, in 2010 he founded Team Tomorrow as a community-uplift organization. Bosh regularly speaks to youths about the benefits of reading, coding, and leadership. Bosh, his wife, Adrienne, and their five children reside in Austin, Texas.

A legendary NBA player and beloved teammate shares his hard-earned wisdom about finding your true purpose and mastering your inner game, whatever that game might be.

Chris Bosh is on any list of the Top 100 NBA players of all time--an eleven-time All Star, two-time Finals winner, Olympic gold medalist, and currently the league's Global Ambassador. Always an uncommonly philosophical NBA star, with interests far beyond basketball, including fashion and music, he found himself needing all the mindfulness he could muster in 2017, when his career was cut short at its prime by a freak medical condition. Suddenly, he was thrown out of his cherished vocation, the work that had given so much more than just a livelihood, and had to think deeply about his passion, his purpose, his identity in the world. This game had taught him so much; what could he make of it all? How could he leave something behind that would help others along the way?

Out of that place of deep reflection has emerged a most uncommon book for a retired superstar to write. While it has the best elements of a memoir--the portraits of the great players and coaches, from LeBron and Kobe to Pat Riley and Coach K, and the accounts of extraordinary competitive moments--it is really a wisdom book, a blend of The Inner Game of Tennis, Wynton Marsalis's To a Young Jazz Musician, and Rilke's Letters to a Young Poet. It is rich with insight about basketball, but even richer with insight about life. Just as Rilke has nourished the soul of many a non-poet, this is not a book for athletes per se--it is for anyone with a hunger to do the inner work to be better, to identify the mental constructs that get in the way of an honest pursuit of excellence, whatever the field. It's a book about finding a purpose that is deep and real, not shallow and external, and about navigating success and failure as the twin mirages they are--pushing past fear, past ego, past fatigue to the pure flow of sustained accomplishment in a mesh with teammates who have given themselves to the same thing. Ultimately this is a celebration of the ecstasy of collective achievement, of submerging your self-interest in shared larger goals. Chris Bosh found that flow, and sustained it at the highest level. He misses basketball keenly still, but he has no regrets. Deep, honest, unflinching, this book is his friend's hand up to those coming up behind, whatever their pursuit might be.

Titel
Letters to a Young Athlete