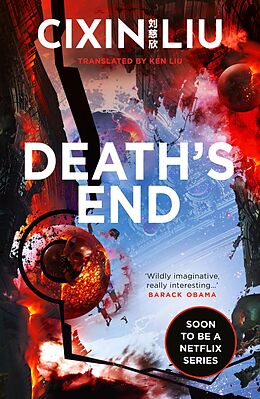 Read the award-winning, critically acclaimed, multi-million-copy-selling science-fiction phenomenon - soon to be a Netflix Original Series from the creators of Game of Thrones.

Half a century after the Doomsday Battle, the uneasy balance of Dark Forest Deterrence keeps the Trisolaran invaders at bay.

Earth enjoys unprecedented prosperity due to the infusion of Trisolaran knowledge and, with human science advancing and the Trisolarans adopting Earth culture, it seems that the two civilizations can co-exist peacefully as equals without the terrible threat of mutually assured annihilation. But peace has made humanity complacent.

Cheng Xin, an aerospace engineer from the 21st century, awakens from hibernation in this new age. She brings knowledge of a long-forgotten program dating from the start of the Trisolar Crisis, and her presence may upset the delicate balance between two worlds. Will humanity reach for the stars or die in its cradle?

Praise for The Three-Body Problem:

'Your next favourite sci-fi novel' Wired

'SF in the grand style' Guardian

Winner of the Hugo and Galaxy Awards for Best Novel

Autorentext
Cixin Liu is China's #1 SF writer and author of The Three-Body Problem the first ever translated novel to win a Hugo Award. Prior to becoming a writer, Liu worked as an engineer in a power plant in Yangquan.Ken Liu is an award-winning American author of speculative fiction. His collection, The Paper Menagerie and Other Stories, has been published in more than a dozen languages. Liu's other works include The Grace of Kings, The Wall of Storms, and Star Wars tie-in The Legends of Luke Skywalker, and a second collection The Hidden Girl and Other Stories. He has been involved in multiple media adaptations of his work including the short story 'Good Hunting', adapted as an episode in Netflix's animated series Love, Death + Robots; and AMC's Pantheon, adapted from an interconnected series of short stories. 'The Hidden Girl', 'The Message', and The Grace of Kings have also been optioned for development. Liu previously worked as a software engineer, corporate lawyer, and litigation consultant. He frequently speaks at conferences and universities on topics including futurism, cryptocurrency, the mathematics of origami, and others. Liu lives with his family near Boston, Massachusetts.