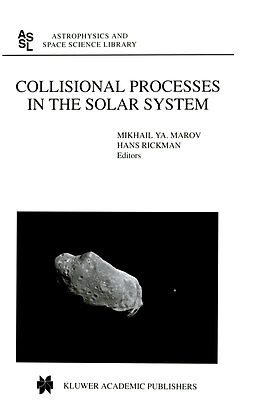 Collisional Processes in the Solar System

The exploration of our Solar System is rapidly growing in importance as a scientific discipline. During the last decades, great progress has been achieved as the result of space missions to planets and small bodies - as­ teroids and comets - and improved remote-sensing methods, as well as due to refined techniques of laboratory measurements and a rapid progress in theoretical studies, involving the development of various astrophysical and geophysical models. These models are based, in particular, on the approach of comparative planetology becoming a powerful tool in revealing evolu­ tionary processes which have been shaping the planets since their origin. Comets and asteroids, being identified as remnants of planetary formation, serve as a clue to the reconstruction of Solar System history because they encapsulated the primordial material from which the planets were built up. At the same time, these interplanetary carriers of original matter and mes­ sengers from the past, being triggered by dynamical processes well outside our neighboring space, were responsible for numerous catastrophic events when impacting on the planets and thus causing dramatic changes of their natural conditions. In the crossroads of astronomy and geophysics, recent years have seen a growing understanding of the importance of collisional processes through­ out the history of the Solar System and, therefore, the necessity to get more insight into the problem of interactions of planets and small bodies.