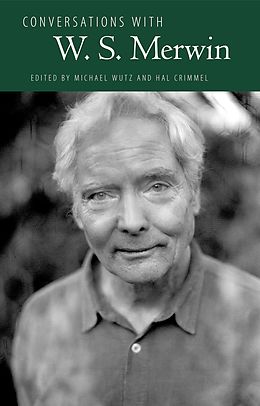 Conversations with W. S. Merwin is the first collection of interviews with former United States Poet Laureate W. S. Merwin (b. 1927). Spanning almost six decades of conversations, the collection touches on such topics as Merwin's early influences (Robert Graves and Ezra Pound), his location within the twin poles of Walt Whitman and Henry David Thoreau, and his extraordinary work as a translator, as well as his decades-long interest in environmental conservation. Anticipating the current sustainability movement and the debates surrounding major and minor literatures, Merwin was, and still is, a visionary.

He is among the most distinguished poets, translators, and thinkers in the United States. A major link between the period of literary modernism and its contemporary extensions, Merwin has been a force in American letters for many decades, and his translations from the Spanish, French, Italian, Japanese, and other languages have earned him unanimous praise and admiration. Merwin also wrote at the forefront of literature's environmental advocacy and early on articulated concerns about ecology and sustainability.

Conversations with W. S. Merwin offers insight into the various dimensions of Merwin's thought by treating his interviews as a self-standing category in his oeuvre. More than casual narratives that interpret the occasional poem or relay an occasional experience, they afford literary and cultural historians a view into the larger throughlines of Merwin's thinking.