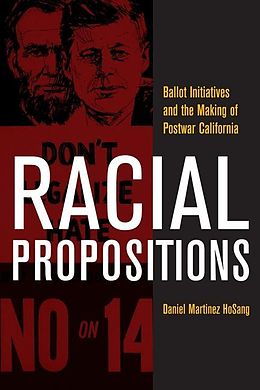 This book looks beyond the headlines to uncover the controversial history of California's ballot measures over the past fifty years. As the rest of the U.S. watched, California voters banned public services for undocumented immigrants, repealed public affirmative action programs, and outlawed bilingual education, among other measures. Why did a state with a liberal political culture, an increasingly diverse populace, and a well-organized civil rights leadership roll back civil rights and anti-discrimination gains? Daniel Martinez HoSang finds that, contrary to popular perception, this phenomenon does not represent a new wave of &quote,color-blind&quote, policies, nor is a triumph of racial conservatism. Instead, in a book that goes beyond the conservative-liberal divide, HoSang uncovers surprising connections between the right and left that reveal how racial inequality has endured. Arguing that each of these measures was a proposition about the meaning of race and racism, his deft, convincing analysis ultimately recasts our understanding of the production of racial identity, inequality, and power in the postwar era.

Daniel Martinez HoSang is Assistant Professor of Political Science and Ethnic Studies at the University of Oregon.

1. "We Have No Master Race": Racial Liberalism and Political Whiteness
2. "Racial and Religious Tolerance Are Highly Desirable Objectives": Fair Employment and the Vicissitudes of Tolerance, 1945-1960
3. "Get Back Your Rights!" Fair Housing and the Right to Discriminate, 1960-1972
4. "We Love All Kids": School Desegregation, Busing, and the Triumph of Racial Innocence, 1972-1982
5. "How Can You Help Unite California?" English Only and the Politics of Exclusion, 1982-1990
6. "They Keep Coming!" The Tangled Roots of Proposition 187
7. "Special Interests Hijacked the Civil Rights Movement": Affirmative Action and Bilingual Education on the Ballot, 1996-2
8. "Dare We Forget the Lessons of History?" Ward Connerly's Racial Privacy Initiative, 2001-2003

Untertitel
Ballot Initiatives and the Making of Postwar California