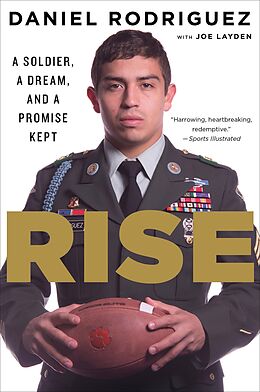 The "harrowing, heartbreaking, redemptive" memoir of a US Army veteran who fought through PTSD to play college football with the Clemson Tigers (Sports Illustrated).

Daniel Rodriguez joined the army just weeks after graduating from high school. Almost immediately, he was deployed to Iraq and then to Afghanistan. While there, he made a promise to his best friend: "When I get out of this shithole, I'm going to play college football." Wounded at the Battle of Kamdesh, Daniel received a Purple Heart and a Bronze Star. He was lucky enough to make it out alive; his friend was not.

Back at home, Daniel was unemployed and stuck in the clutches of PTSD, but he remembered the promise he had made and resolved to make good on it. When he posted a video online of his grueling training efforts, it went viral overnight. Through a mixture of hope, determination, and the power of the Internet, Daniel earned a spot on the Clemson University football team as a wide receiver. In Rise, Rodriguez tells his powerful and inspiring story.

"A compelling story of one man's quest to overcome the horrors of war through fortitude and determination." -San Antonio Express News

Untertitel
A Soldier, A Dream, And A Promise Kept