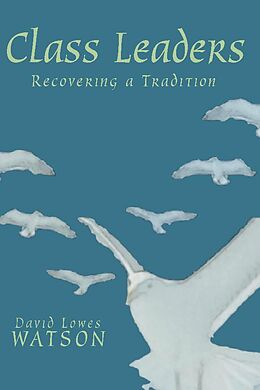 In 1988, The General Conference of the United Methodist Church restored class leaders and class meetings to the Book of Discipline after an absence of fifty years. In this volume, David Lowes Watson explains what the recovery of this tradition can mean for congregations, and offers some guidelines for the revitalized office of class leader. Adapting the later Methodist class meeting as a pastoral subdivision of the congregation, Watson shows how class leaders, under the supervision of the pastor, can nurture the discipline of other church members in light of a "General Rule of Discipline" derived from the early Methodist societies: "To witness to Jesus Christ in the world, and to follow his teachings through acts of compassion, justice, worship, and devotion, under the guidance of the Holy Spirit." This volume is the second in a trilogy : Covenant Discipleship, Class Leaders, and Forming Christian Disciples.

Autorentext
David Lowes Watson is Director of the Office of Pastoral Formation for the Nashville Episcopal Area of The United Methodist Church.

A native of England, he was educated at Oxford University, (M.A.), Eden Theological Seminary, St. Louis, Missouri (M.Div.), and Duke University, Durham, North Carolina (Ph.D.). He has pastored inner city and rural congregations in Illinois and North Carolina, and has served as Executive Secretary for Covenant Discipleship and Christian Formation at the General Board of Discipleship of The United Methodist Church. He has taught at Southern Methodist University as the McCreless Professor of Evangelism at Perkins School of Theology, and at Wesley Theological Seminary in Washington, D.C. as Professor of Theology and Congregational Life and Mission.

He has written extensively in the fields of Methodist history and theology, evangelism, and congregational life and mission. His books include The Early Methodist Class Meeting, and God Does Not Foreclose. He has also written curriculum resources for The United Methodist Church, including the New Testament studies in Troublesome Bible Passages. He was the founding editor of the Covenant Discipleship Quarterly and the Journal of the Academy for Evangelism in Theological Education, of which he is a past President. He has served on the Board of Directors of the Bicentennial Edition of The Works of John Wesley and is presently a member of the Board of Directors of Eden Theological Seminary.