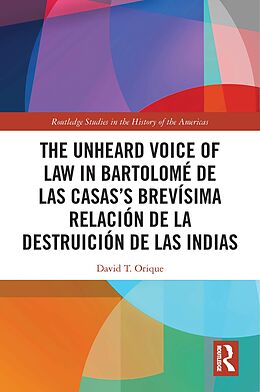 Bartolomé de las Casas proclaimed: "I have labored to inquire about, study, and discern the law; I have plumbed the depths and have reached the headwaters." The Unheard Voice also plumbs the depths of Las Casas's voice of law in his widely read and highly controversial Brevísima relación-a legal document published and debated since the 16th century. This original reinterpretation of his Very Brief Account uncovers the juridical approach voiced in his defense of the Indigenous peoples of the Americas. The Unheard Voice innovatively asserts that the Brevísima relación's legal character is intimately linked to civil and ecclesial genres of the late Renaissance juridical tradition. This paradigm-shifting book contextualizes the formation of Las Casas's juridical voice in canon law and theology-initially as a secular cleric, subsequently as a Dominican friar, and finally as a diocesan bishop-and demonstrates how his experienced juridical voice fought for justice in trans-Atlantic debates about Indigenous peoples' level of humanity, religious freedom, enslavement, and conquest. Reaching the headwaters of Las Casas's hitherto unheard juridical voice of law in the Brevísima relación provides readers with a previously unheard interpretation-an appealing voice for readers and students of this powerful Early Modern text that still resonates today.

The Unheard Voice of Law

is a valuable companion text for many in the disciplines of literature, history, theology, law, and philosophy who read Bartolomé de las Casas's Very Brief Account and study his life, labor, and legacy.

David T. Orique is an Associate Professor of Colonial and Modern Latin America, as well as the Iberian Atlantic World, and the Director of Latin American and Latinx Studies, at Providence College.