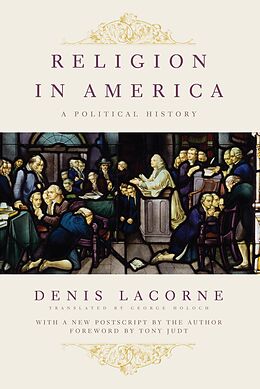 Denis Lacorne identifies two competing narratives defining the American identity. The first narrative, derived from the philosophy of the Enlightenment, is essentially secular. Associated with the Founding Fathers and reflected in the Declaration of Independence, the Constitution, and the Federalist Papers, this line of reasoning is predicated on separating religion from politics to preserve political freedom from an overpowering church. Prominent thinkers such as Voltaire, Thomas Paine, and Jean-Nicolas Démeunier, who viewed the American project as a radical attempt to create a new regime free from religion and the weight of ancient history, embraced this American effort to establish a genuine "wall of separation" between church and state.

The second narrative is based on the premise that religion is a fundamental part of the American identity and emphasizes the importance of the original settlement of America by New England Puritans. This alternative vision was elaborated by Whig politicians and Romantic historians in the first half of the nineteenth century. It is still shared by modern political scientists such as Samuel Huntington. These thinkers insist America possesses a core, stable "Creed" mixing Protestant and republican values. Lacorne outlines the role of religion in the making of these narratives and examines, against this backdrop, how key historians, philosophers, novelists, and intellectuals situate religion in American politics.

Foreword, by Tony Judt
Introduction
1. America, the Land of Religious Utopias
2. The Rehabilitation of the Puritans
3. Evangelical Awakenings
4. The Bible Wars
5. Religion
6. A Godless America
7. The Rise of the Religious Right
8. The Wall of Separation Between Church and State
Epilogue: Obama's Faith-Friendly Secularism
Postscript
Appendix: The Religious Composition of the United States
Notes
Bibliography