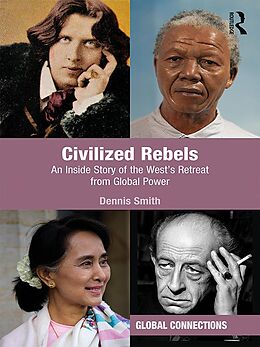 Civilized Rebels compares in depth four very well-known literary and political figures, who all opposed arrogant regimes and became prisoners. Through comparative biographies of Oscar Wilde, Jean Améry, Nelson Mandela and Aung San Suu Kyi, it explores the long-term process of the retreat of the West from global power since the late nineteenth century, relating this to the decline and fall of the British Empire and the trauma surrounding Brexit. Drawing on rich empirical materials to examine themes of forced displacement, war, poverty, imprisonment and the threat of humiliation, the book reveals how these highly civilized rebels penetrated their opponents' mind-sets, while also providing a sophisticated analysis of how their struggles fitted into the larger world picture. Methodologically and theoretically innovative, and written in a lively and accessible style, Civilized Rebels will appeal to scholars across a range of disciplines, with interests in globalization, historical international relations, postcolonial and subaltern studies, comparative biographical studies, European studies, the sociology of emotions and historical sociology.

Dennis Smith is Emeritus Professor of Sociology at Loughborough University, UK. He is the author of The Rise of Historical Sociology, Globalization: The Hidden Agenda, and Conflict and Compromise: Class Formation in English Society 1830-1914.

Untertitel
An Inside Story of the West's Retreat from Global Power