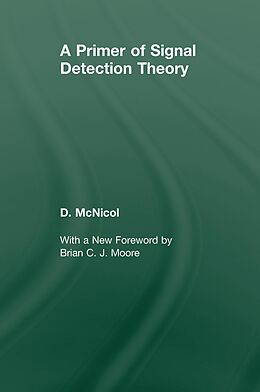 A Primer of Signal Detection Theory

A Primer of Signal Detection Theory is being reprinted to fill the gap in literature on Signal Detection Theory--a theory that is still important in psychology, hearing, vision, audiology, and related subjects. This book is intended to present the methods of Signal Detection Theory to a person with a basic mathematical background. It assumes knowledge only of elementary algebra and elementary statistics. Symbols and terminology are kept at a basic level so that the eventual and hoped for transfer to a more advanced text will be accomplished as easily as possible. Intended for undergraduate students at an introductory level, the book is divided into two sections. The first part introduces the basic ideas of detection theory and its fundamental measures. Its aim is to enable the reader to be able to understand and compute these measures. It concludes with a detailed analysis of a typical experiment and a discussion of some of the problems which can arise for the potential user of detection theory. The second section considers three more advanced topics: threshold theory, the extension of detection theory, and an examination of Thurstonian scaling procedures.