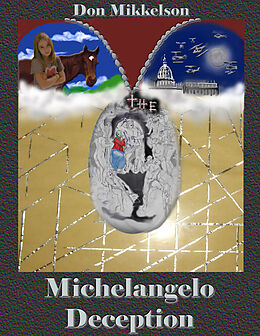 A Russian girl is adopted by a MN farm couple. She discovers Michelangelo's deceptions in the Last Judgment and faces murder by Catholic clerics & Italian Mafiosi who are conspiring to get rid of a new, African-American reformist pope.

While I was researching and writing my novel (2007-2009) a video and a book were being created corroborating my view that the artist had engaged in massive deceptions when he sculpted Pope Julius's tomb and painted the ceiling and Last Judgment frescoes in the Sistine Chapel, the most sacred chapel in Christendom. The first example of that fact involves Antonio Forcellino, a renowned Italian art historian and his elderly mentor. They appear in a PBS video broadcast titled &quote;Michelangelo Revealed&quote; which was released the month after I finished my novel in April of 2009. They confirm, in detail, what I had discovered about the artist's antipathy toward the papacy and Church doctrine. Pope Julius II had commissioned Michelangelo to create a gigantic sarcophagus worthy of a Caesar. The artist created only a shadow of what was intended, but expressed his views in the Moses sculpture that stands on the tomb. The video is available for viewing by googling the title on your browser. The sec