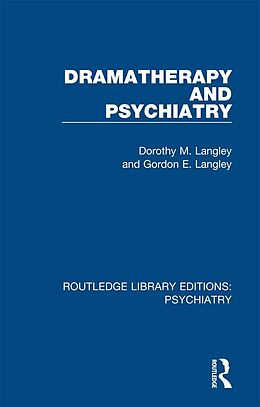 As part of the overall growing interest in the rehabilitation of people with mental illness in the 1980s, therapy through drama was being seen increasingly as a significant aspect of therapeutic programmes. While the subject of remedial drama for people with disabilities was reasonably well documented, originally published in 1983, this was the first book to address the topic applied to psychiatric patients (or clients).

The book is intended to be practical throughout and keeps jargon to a minimum. It is not written for professional or student dramatherapists alone, but is aimed as much at occupational therapists, nurses, social workers, psychiatrists and psychologists who are all involved in rehabilitation of people with mental illness. Topics discussed include referral by the psychiatrist, and general and specific approaches to dramatherapy. In addition, practical application is given to particular groups such as elderly people and those with schizophrenia.