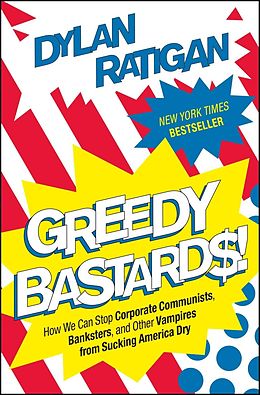 The host of the eponymous MSNBC show, Dylan Ratigan offers a bold and original post-partisan program to resuscitate the American Dream.

At a time of deep concern with the state of America's economy and government, it seems that all the media can give us is talking (or screaming) heads who revel in partisan brinkmanship. Then there's Dylan Ratigan—an award-winning journalist respected and admired across the political spectrum. In Greedy Bastards, he rips the lid off of our deeply crooked system—and offers a way out.

Employing the nuanced reporting and critical analysis that have earned him so much respect, Ratigan describes the five "vampires” that are sucking the nation dry, including an educational system that values mediocrity above all else; a healthcare system that is among the priciest and least-effective infrastructures in the industrialized world; a political system in which lobbyists write legislation; a "master-slave” relationship with our Chinese bankers; and an addiction to foreign oil that has sapped our willingness to innovate. In offering solutions to these formidable and entrenched obstacles, he does nothing less than lay the groundwork for a political movement dedicated to tackling the rot at the heart of the country.

In its desperation, America needs more than just endless stock tips and Wall Street navel-gazing. It needs passionate debate and smart policy—and a hero to take on the establishment. Dylan Ratigan is that hero, and this is the book that will rally people behind him.

Untertitel
How We Can Stop Corporate Communists, Banksters, and Other Vampires from Sucking America Dry