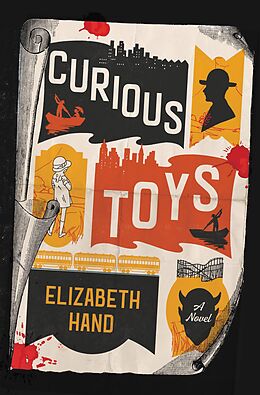 An intrepid young woman stalks a murderer through turn-of-the-century Chicago in "this rich, spooky, and atmospheric thriller that will appeal to fans of Henry Darger and Erik Larson alike" (Sarah McCarry).

In the sweltering summer of 1915, Pin, the fourteen-year-old daughter of a carnival fortune-teller, dresses as a boy and joins a teenage gang that roams the famous Riverview amusement park, looking for trouble.

Unbeknownst to the well-heeled city-dwellers and visitors who come to enjoy the midway, the park is also host to a ruthless killer who uses the shadows of the dark carnival attractions to conduct his crimes. When Pin sees a man enter the Hell Gate ride with a young girl, and emerge alone, she knows that something horrific has occurred.

The crime will lead her to the iconic outsider artist Henry Darger, a brilliant but seemingly mad man. Together, the two navigate the seedy underbelly of a changing city to uncover a murderer few even know to look for.

Autorentext
Elizabeth Hand is the author of more than fourteen cross-genre novels and collections of short fiction. Her work has received the Shirley Jackson Award (three times), the World Fantasy Award (four times), the Nebula Award (twice), as well as the James M. Tiptree Jr. and Mythopoeic Society Awards. She's a longtime critic and contributor of essays for the Washington Post, Los Angeles Times, Salon, Boston Review, and the Village Voice, among many others. She divides her time between the Maine coast and North London.