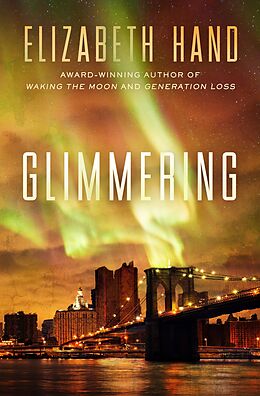 "If Stephen King set out to rewrite The Waste Land as a novel, the result might resemble Glimmering." -The Washington Post

Climate change, rampant viruses, blackouts, fundamentalists-the end of the end has arrived. Glimmering, the 1994 dystopian novel by Nebula and World Fantasy Award-winning author Elizabeth Hand, is now timelier than ever.

When the confluence of a solar storm and the collapse of the Antarctic ice shelf ignites the atmosphere like grease, those who are able hide behind their walls and masks, seeking the promise of a seductive-and dangerous-future. As the earth erupts in flames, department store heir and editor Jack Finnegan faces his own inevitable death from AIDS in his family's decrepit mansion near the Hudson River-that is, until an old friend offers him a miraculous cure . . .

Christian singer Trip Marlowe has found worldwide success, but the dynamic rock star retains his strict morality and faith. Temptation comes in the form of a mysterious blond waif and IZE, a new drug more addictive than crack and heroin . . .

The two men will find themselves on a bizarre collision course as a dark and powerful force seeks to shape what's left of humanity's consciousness.

"A brutal vision of Apocalypse . . . Hand's powerful vision of these days of wrath is not so much a protracted self-pitying whisper as a Nietzschean insistence on salvation through creative evolution." -Publishers Weekly, starred review

Elizabeth Hand is the author of sixteen multiple-award-winning novels and six collections of short fiction. She is a longtime reviewer for numerous publications, including the Washington Post, the Los Angeles Times, and the Magazine of Fantasy & Science Fiction. Her noir novels featuring punk photographer Cass Neary have been compared to the work of Patricia Highsmith and optioned for a TV series. Hand teaches at the Stonecoast MFA Program in Creative Writing and, when not living under pandemic conditions, divides her time between the Maine coast and North London.