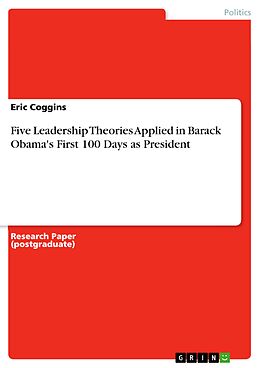 Research Paper (postgraduate) from the year 2009 in the subject Politics - International Politics - Region: USA, grade: A, Regent University School of Global Leadership & Entrepreneurship (Regent University School of Global Leadership & Entrepreneurship), language: English, abstract: In his acceptance speech delivered in Chicago's Grant Park, newly chosen President-elect Barack Hussein Obama threw down the gauntlet and declared, 'A new dawn of American leadership is at hand' (DeFrank, 2008). Indeed, the unprecedented election of Barack Obama as the 44th President of the United States of America was met with historically high expectations (Ruggeri, 2009). In his first 100 days in office, Obama attempted to fulfill those expectations. Ghattas (2009) wrote: 'The breadth of issues he has tackled in this short time is unprecedented, prompting former Secretary of State Henry Kissinger to write recently in the Washington Post that 'the possibility of comprehensive solutions is unprecedented'. There is no guarantee that any of it will lead to success over the next four years, but the new administration is aiming high.' As the new president engaged a large breadth of issues, he had to exercise a broad range of leadership theories and exercises. This paper examines five of leadership models he demonstrated in his first 100 years in office.