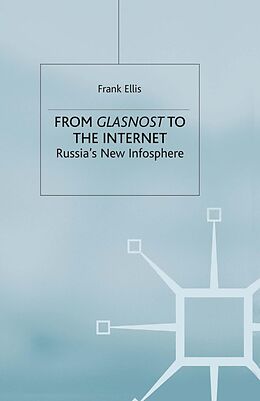 From Glasnost to the Internet

The Soviet collapse of 1991 - the Great August liberation - demonstrated the total exhaustion of Marxist-Leninist agitation and propaganda. It was no longer possible to live on slogans. The failure of Soviet agitprop is also the failure of Soviet censorship the latter being a unique institution in anti-thought. In From Glasnost to the Internet Ellis analyses the consequences of censorship, before tackling the media legislation of the Russian Federation and the new dangers to the free flow of information emerging both within and outside the Russian Federation.

Frank Ellis is a former Russian military interpreter and Soviet analyst in the British army.

Preface Glossary of Soviet and Russian Media Terms Significant Events in Media and Communications: From Lenin to Eltsyn PART I: THE COLLAPSE OF SOVIET COMMUNISM Information Deficit PART II: LIBERTY: THE NURSE OF ALL GREAT WITS Mass Media Legislation of the Russian Federation Russian Journalism's Time of Troubles PART III: SHAPING THE NEW INFOSPHERE A Survey of Russia's Culture and Media Wars The Internet in Russia Concluding Remarks

Titel
From Glasnost to the Internet