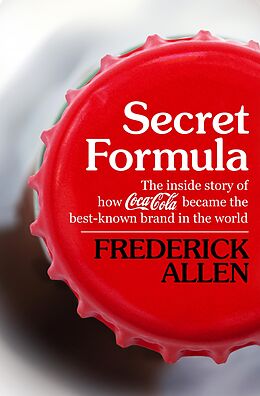 A "highly entertaining history [of] global hustling, cola wars and the marketing savvy that carved a niche for Coke in the American social psyche" (Publishers Weekly). Secret Formula follows the colorful characters who turned a relic from the patent medicine era into a company worth $80 billion. Award-winning reporter Frederick Allen's engaging account begins with Asa Candler, a nineteenth-century pharmacist in Atlanta who secured the rights to the original Coca-Cola formula and then struggled to get the cocaine out of the recipe. After many tweaks, he finally succeeded in turning a backroom belly-wash into a thriving enterprise. In 1919, an aggressive banker named Ernest Woodruff leveraged a high-risk buyout of the Candlers and installed his son at the helm of the company. Robert Woodruff spent the next six decades guiding Coca-Cola with a single-minded determination that turned the soft drink into a part of the landscape and social fabric of America. Written with unprecedented access to Coca-Cola's archives, as well as the inner circle and private papers of Woodruff, Allen's captivating business biography stands as the definitive account of what it took to build America's most iconic company and one of the world's greatest business success stories.

Autorentext
Frederick Allen was an award-winning reporter and political columnist with the Atlanta Journal-Constitution from 1972 to 1987, after which he joined CNN as a chief analyst and commentator covering the 1988 presidential election. His essays for the program Inside Politics earned CNN a CableACE Award, and Allen was called the "best political analyst" by the editors of the Hotline. Allen is the author of three books, including his history of the Coca-Cola Company, Secret Formula; Atlanta Rising, a history of modern Atlanta; and A Decent, Orderly Lynching, an account of the vigilantes of Montana. He was honored by the Western History Association with the inaugural Michael P. Malone Award for his research into vigilante symbolism, and is currently working on a book about Theodore Roosevelt. Allen graduated from Phillips Academy (Andover) and earned a BA in journalism from the University of North Carolina, Chapel Hill. He and his wife, Linda, live in Atlanta, Georgia, and Big Sky, Montana.