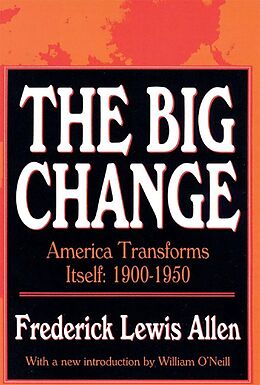 Frederick Lewis Allen was one of the pioneers in social history. Best known as the author of Only Yesterday, Allen originated a model of what is sometimes called instant history, the reconstruction of past eras through vivid commentary on the news, fashions, customs, and artifacts that altered the pace and forms of American life. The Big Change was Allen's last and most ambitious book. In it he attempted to chart and explain the progressive evolution of American life over half a century. Written at a time of unprecedented optimism and prosperity, The Big Change defines a transformative moment in American history and provides an implicit and illuminating perspective on what has taken place in the second half of the twentieth century.Allen's theme is the realization, in large measure, of the promise of democracy. As against the strain of social criticism that saw America as enfeebled by affluence and conformity, Allen wrote in praise of an economic system that had ushered in a new age of well being for the American people. He divides his inquiry into three major sections. The first, 'The Old Order,' portrays the turn-of-the-century plutocracy in which the federal government was largely subservient to business interests and the gap between rich and poor portended a real possibility of bloody rebellion. 'The Momentum of Change' graphically describes the various forces that gradually transformed the country in the new century: mass production, the automobile, the Great Depression and the coming of big government, World War II and America's emergence as a world power. Against this background, Allen shows how the economic system was reformed without being ruined, and how social gaps began to steadily close.The concluding section, 'The New America,' is a hopeful assessment of postwar American culture. Allen's analysis takes critical issue with many common perceptions, both foreign and domestic, of American life and places remaining social problems in careful perspective. As William O'Neill remarks in his introduction to this new edition, The Big Change is both a deep and wonderfully readable work of social commentary, a book that gains rather than loses with the years.