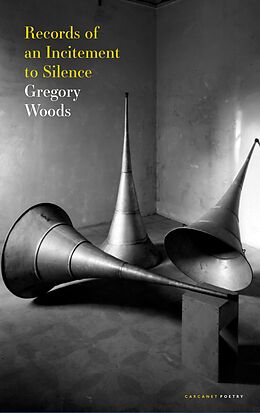 Records of an Incitement to Silence

Gregory Woods is the leading British critic and historian of gay literature. He has published five previous Carcanet poetry collections, the first being We Have The Melon (1992). Ten years in the making, Records of an Incitement to Silence revisits many of the original themes, but here Woods brings them closer to the endgame.

The sequence of stripped-down, unrhymed sonnets, and the longer poems that accentuate it, suggest a missing narrative: the growth of the individual in a world of upheaval, the search for and loss of love, the formation of memories, the limits of what can truthfully be said, the traces we leave and the chance of their survival.

Gregory Woods was born in Egypt in 1953, and brought up in Ghana. He is the author of Articulate Flesh: Male Homoeroticism and Modern Poetry (1987), A History of Gay Literature: The Male Tradition (1998) and Homintern: How Gay Culture Liberated the Modern World (2016), all from Yale University Press. His essay collection The Myth of the Last Taboo: Queer Subcultural Studies was published by Trent Editions (2016). In addition to his six main poetry collections, all with Carcanet, chapbooks of his have been published by Shoestring Press and Sow's Ear Press.

Woods has two doctorates from the University of East Anglia (1983, 2006). He began his teaching career at the University of Salerno in 1980. In 1998 he became the first Professor of Gay & Lesbian Studies in the UK, at Nottingham Trent University, where he is now Professor Emeritus. He is a Founding Fellow of the English Association and has held two Hawthornden Fellowships (1999, 2008).

Titel
Records of an Incitement to Silence