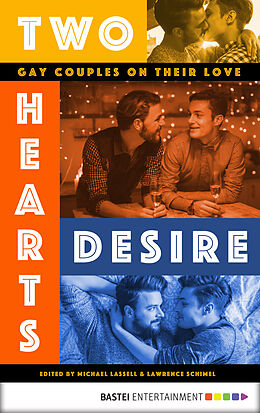 Autorentext
Michael Lassell is a writer and editor whose work has been widely published, edited, and translated. He is the author of three books of poetry, Poems for Lost and Un-lost Boys (Amelia, 1985), Decade Dance (Alyson, 1990--winner of a Lambda Literary Award), and A Flame for the Touch That Matters (Painted Leaf, 1998). He is the editor of The Name of Love: Classic Gay Love Poems (St. Martin, 1995), Eros in Boystown: Contemporary Gay Poems About Sex (St. Martin, 1996), and, with Elena Georgiou, The World in Us Lesbian and Gay Poetry of the Next Wave (St. Martin, 2001). He is also the author of The Hard Way (Richard Kasak, 1995) a collection of his fiction and nonfiction writing for the American LGBT press. His short stories were collected in Certain Ecstasies (Painted Leaf, 1999). A former editor of Interview and Metropolitan Home magazines, he currently resides in New York, where he writes about theater, architecture, and design for numerous publications. He has published three books on interior design with Hachette and is currently at work on his fifth, sixth, and seventh books about Disney theatrical productions on Broadway. Lawrence Schimel (New York, 1971) is a full-time author, writing in both Spanish and English, who has published over one hundred books in wide range of genres as writer or anthologist, including First Person Queer, The Drag Queen of Elfland, PoMoSexuals: Challenging Assumptions about Gender and Sexuality, Things Invisible to See: Lesbian and Gay Tales of Magic Realism, and The Mammoth Book of Gay Erotica, among others. He is also a prolific literary translator. His short stories, poems, and essays have appeared in numerous publications-The Wall Street Journal, The Christian Science Monitor, The Saturday Evening Post, The Boston Phoenix, The Tampa Tribune, Isaac Asimov's Science Fiction Magazine, Physics Today, etc.-as well as in more than 200 anthologies. His work has been published in Basque, Catalan, Croatian, Czech, Dutch, English, Esperanto, Estonian, Finnish, French, Galician, German, Greek, Hungarian, Icelandic, Indonesian, Italian, Japanese, Korean, Maltese, Polish, Portuguese, Romanian, Russian, Serbian, Slovak, Slovene, Spanish, Turkish, and Ukrainian translations. He has won the Lambda Literary Award (twice), the Spectrum Award, the Independent Publisher Book Award, the Siegessäule Book of the Year Award, and the Rhysling Award for poetry, among many other awards, honors, and distinctions. He lives in Madrid, Spain and New York City.

Untertitel
Gay Couples on their Love