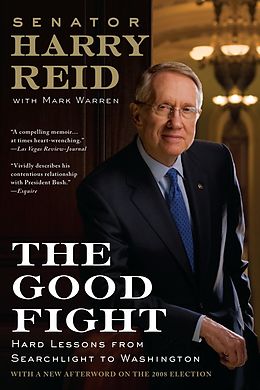 After a childhood of shocking poverty, Harry Reid completed law school, working as a policeman to pay his way. He faced death threats as the head of the Nevada Gaming Commission trying to clean up Las Vegas. Eventually he rose to become Senate Majority Leader in Washington-without ever forgetting the mining town he came from, or the battles he fought along the way. This is that rare book by a politician that is more than a glorified press release. It is an extraordinary American story-told in a voice that is flinty, real, and filled with passion.

Harry Reid was born in Searchlight, Nevada, in a small cabin without indoor plumbing, and attended a two-room elementary school until the eighth grade, when he started hitchhiking 45 miles across open desert to high school in Henderson, Nevada. Businessmen in Henderson helped him go on to college at Utah State University, and he went on to get a law degree from George Washington University, working full-time jobs in the House mailroom and then as a Capitol Police officer to support him and his family. After serving as Henderson's City Attorney, at age 28 he was elected to the Nevada State Assembly, and then in 1970, at the age of 30, he became the state's youngest Lieutenant Governor.

Runs for the U.S. Senate in 1974 and Las Vegas mayor in 1976 resulted in defeat, and Reid assumed his political career was over, until in 1977, the governor appointed him chairman of the Nevada Gaming Commission, where for four years he made headlines with his unrelenting fight to clean up the gaming industry. He won the first of two terms to the House of Representatives in 1982, then was elected to the U.S. Senate in 1986. Currently serving his fourth term, he was unanimously elected Senate Minority Leader in 2004 and, after the Democrats captured the Senate in 2006, Senate Majority Leader.

Mark Warren is Executive Editor of Esquire magazine, where he has worked since 1988, directing much of the magazine's political writing. He also collaborated with Thomas P.M. Barnett on The Pentagon's New Map, which originated with a story in Esquire, as well as Barnett's Blueprint for Action. Born, raised and educated in Texas, Warren directed or worked on several national, state and political campaigns out of Austin from 1983 to 1988, and was also a chief of staff to a senator from Houston. He lives in New York City.