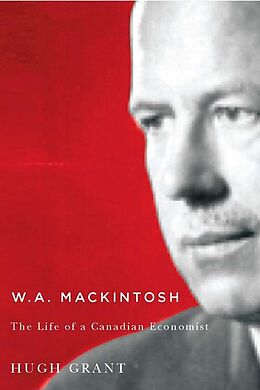 W.A. Mackintosh (1895-1970) was an exemplary public intellectual and a modest person of rare abilities. In the first biography of this influential economist, Hugh Grant addresses how Mackintosh's commitment to public service and to the principles of reason and tolerance shaped his contribution to economic scholarship, government policy, and university governance. In the 1920s and '30s, Mackintosh emerged as the country's leading economist. His most notable contribution was through his &quote,co-discovery&quote, with Harold Innis of the staple thesis of Canadian economic development, which informed research in the field for a generation. During the Second World War Mackintosh joined the Department of Finance, where he played a central role in the successful management of the wartime economy and in Canada's adoption of Keynesian economic policy. As the author of the federal government's 1945 White Paper, Mackintosh laid out the broad strokes of Canada's adherence to Keynesianism in the post-war period. After his return to Queen's, Mackintosh would become the university's fifteenth principal and guide the institution as it prepared for the transformation of Canadian universities. A remarkable man who had a profound influence on the development of modern Canada, this definitive biography restores the record on his important contributions to Canadian economic thought and national and international finance.

Untertitel
The Life of a Canadian Economist