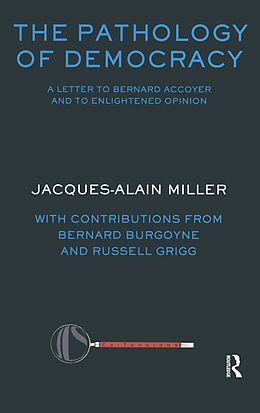 The Pathology of Democracy

"Published in association with the Journal for Lacanian Studies (JLS), the Ex-tensions series of short books aims to address "extant tensions" affecting the broad field of Lacanian psychoanalysis, whether they originate within its own boundaries or outside its direct sphere of influence. The 6rst of these books is by the renowned Lacanian Jacques-Aloin Miller. On Wednesday 8 October 2003, the French National Assembly passed a bill intended to regulate, for the 6rst time, the practice of psychotherapy in France. Moved by Bernard Accoyer, the purpose of the legislation was to restrict the practice of psychotherapy to psychiatrists and clinical psychologists; it would effectively no longer be legal for any other practitioners, including psycho- analysts, to practice in the sphere of mental health. "

Titel
The Pathology of Democracy