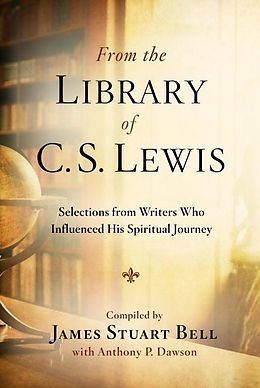 From the Library of C. S. Lewis

C. S. Lewis was perhaps the greatest Christian thinker of the twentieth century. He delighted us in The Chronicles of Narnia, intrigued us in The Screwtape Letters, mystified us in The Space Trilogy, and convinced us in Mere Christianity. His influence on generations of Christians has been immeasurable.

Drawn from Lewis's personal library, annotations, and references from his writings, the selections in this book bring us into contact with giants such as Dante, Augustine, and Chaucer, as well as introduce us to more contemporary writers such as G. K. Chesterton, Charles Williams, George MacDonald, and J. R. R. Tolkien. Over 250 selections provide a vast array of inspiration from those who have shone forth as messengers of light in Lewis's own thinking, writing, and spiritual growth.

A rare glimpse into the intellectual, spiritual, and creative life of one of literature's great writers, From the Library of C. S. Lewis is a treasury of insight and wisdom.

James Stuart Bell wrote his master's thesis on C. S. Lewis, receiving his M. A. from University College Dublin, in Ireland. The owner of Whitestone Communications and the former executive editor of Moody Press and director of religious publishing for Doubleday, Bell has authored six books, including The Complete Idiot's Guide to the Bible.

Anthony Palmer Dawson assisted Dr. Barbara Reynolds with the four-volume Letters of Dorothy L. Sayers, and is a contributor to SEVEN: An Anglo-American Literary Review published by the Marion E. Wade Center at Wheaton College, Illinois. He has served on the Wade Center Steering Committee for eighteen years and provides technical and editorial support for SEVEN. Dawson holds a B.S. degree from Olivet Nazarene University, and the M.A. from Wheaton College, where he is currently employed as the Associate Director of Computing Services.

Titel
From the Library of C. S. Lewis

Untertitel
Selections from Writers Who Influenced His Spiritual Journey