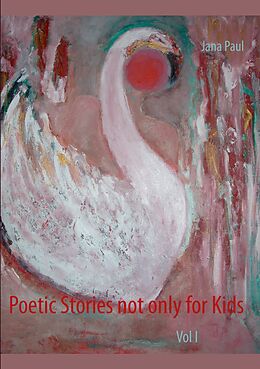 Poetic Stories not only for Kids

This book includes small jewels of poetic stories written not only for kids. They are ideal for reading during travel, before bedtime, or just for dreamy entertainment for anyone who wants to escape into the world of little butterflies, dwarves and sandmen, stars and flowers with their own idyosyncracies and wonders.

Autorentext
Jana Paul:Jana Paul was born in Oberhausen, Germany, in 1965. Already as a young girl, she discovered her love for the arts, literature, and music. At the age of 8, she was awarded the 1st prize of her age group in the Jim Knopf and Lucas painting contest for children, staged by the Theatre in Essen. Equally at the age of 8, she started her musical education as a flutist and later dedicated herself to ballet dancing, classical and oriental dance, as well as Flamenco. Since 1999, she has intensified her autodidactical oilart , drawing studies, and writing. First exhibition at the WBI in Dortmund: Poetic Imaginations (2003). The artist lives in Oberhausen with her son and runs her own translation agency on an international level. She is registered in Kürschners Handbuch der Bildenden Künstler (Kürschner's Handbook of Visual Artists). Her works are highly poetic and symbolic and depict mysticism and magical topics, fine art nudes, as well as adventurelands and dreamlands of intense colour. Her first book, Poetic Stories not only for Kids , published in October 2011, is a poetic journey of words for children and grown-ups alike.

Titel
Poetic Stories not only for Kids