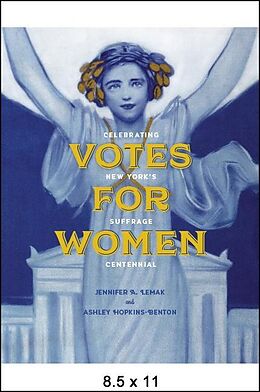 The work for women's suffrage started more than seventy years before the passage of the Nineteenth Amendment at the Seneca Falls Convention in 1848 when Elizabeth Cady Stanton, Lucretia Mott, and one hundred supporters signed the Declaration of Sentiments asserting that "all men and women are created equal." This convention served as a catalyst for debates and action on both the national and state levels, and on November 6, 1917, New York State passed the referendum for women's suffrage. Its passing in New York signaled that the national passage of suffrage would soon follow. On August 18, 1920, "Votes for Women" was constitutionally granted.

Votes for Women, an exhibition catalog, celebrates the pivotal role the state played in the struggle for equal rights in the nineteenth century, the campaign for New York State suffrage, and the ratification of the Nineteenth Amendment. It highlights the nationally significant role of state leaders in regards to women's rights and the feminist movement through the early twenty-first century and includes focused essays from historians on the various aspects of the suffrage and equal rights movements around New York, providing greater detail about local stories with statewide significance.

>
Jennifer A. Lemak is Chief Curator of History at the New York State Museum. She is the author of Southern Life, Northern City: The History of Albany's Rapp Road Community and (with Robert Weible and Aaron Noble) An Irrepressible Conflict: The Empire State in the Civil War, both also published by SUNY Press. Ashley Hopkins-Benton is a Senior Historian and Curator at the New York State Museum and the author of Breathing Life into Stone: The Sculpture of Henry DiSpirito.