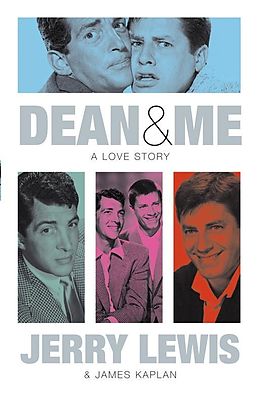 The No1 New York Times Bestseller Before the string of hit songs, the Rat Pack, and the stellar movie career, Dean Martin spent ten years partnering Jerry Lewis in one of the most successful double acts of show business history. In this wise-cracking yet candid memoir, Lewis recalls with crystal clarity the highs and lows of his relationship with Dean: remembering their first meeting on a New York street corner one spring afternoon, the early improvised performances in mob owned nightclubs, and the giddy days of Hollywood super-stardom, when it seemed the couples high-rolling lifestyle would last for ever. It didn't. On July 24th 1956, Dean and Jerry split and the two men weren't to speak to one another for twenty years. Jerry Lewis is one of the few surviving Hollywood legends from the period and he is a wonderful raconteur whose tales reveal much about Dean Martin's craftsmanship and enigmatic charm. In his own unique voice he evokes all the glamour of the era - the casinos, the endless pranks, the cocktails, the mobsters, and the women. He writes movingly too of the thrill of the youthful duo's sudden, startling success, and the slow sad erosion of the fun that followed.

For ten years after WWII, Dean Martin and Jerry Lewis weren't only the most successful show business act in history, they were history. Starting as a fill-in for another act in Atlantic city, their improvised, anarchic routines soon sold out all the greatest venues in America. They made films, they made millions. They made a legend. But amidst the dazzling success and the late night laughter, tensions developed between the reserved straight man, Martin, and the manic goon, Lewis. When the duo, who had reinvented the comic double-act, split acrimoniously in 1956 they didn't speak to one another for the next 20 years. This is an intimate memoir of those years of fame and success by one of the only surviving legends of the rat-pack era. Jerry Lewis remembers everything - the casinos, the mobsters, the endless pranks, the cocktails, the women, the meteoric rise to stardom. Here for the first and only time and in his own inimitable, wise-cracking voice he re-lives his days of glory with Dean Martin and gives a frank account of their relationship and break-up. A hilarious ride and heart-breaking, cautionary tale of what fame and fortune can do to love and friendship.

Titel
Dean And Me