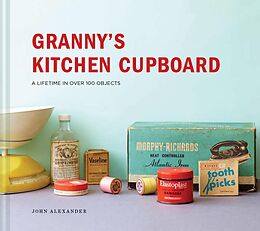 Accumulated over many years, 'Granny', the enigmatic collector behind this book, presents a selection of quirky post-war goods, advertising and kitchen items.

In Granny's Kitchen Cupboard you'll find a remarkable array of British twentieth-century ephemera. From children's toys, boil dressings and chocolate wrappers to butane fuel and TCP, this selection is an incredible collection of innovative advertising designs, odd curios that have long since been replaced by modern technologies, and recognisable old brands. After the end of austerity in Britain in the early 1950s, consumerism boomed and these objects portray the societal change that followed.

Beautifully arranged throughout, the contents of this book reflect aspects of a long life, most of it lived in a single house in the Home Counties. Nothing was thrown away - everything was recycled and reused in a way that says something about their time, in particular the thrifty mindset instilled by rationing in World War Two.

The collection features old household brands that have evolved into various iterations into the present day, such as Harrods, Johnson's, Vaseline, Vicks, Elastoplast, the AA, Strepsils, W H Smith, Boots, Hoover, Happy Shopper and Lego. But this collection also features some odd items that may evoke nostalgia or even amusement, including fascinating catalogues, vintage pastille tins, an apothecary of unusual medicines, odd household cleaners not to mention rifle cartridges. The book also includes text that divulges the history and use of each object.

John Alexander's mother, Jennifer Alexander, was born into an army family in the early 1920s. She lived a full life; spending her childhood in India and travelling throughout Europe before air travel became unremarkable.

During the Second World War, Jennifer served in the WRNS, hopping on planes to London for the weekend from her naval airstation in the Lowlands. Afterwards, Jennifer had two stints working at Queen magazine in the 1950s.

In 1960 Jennifer married and the following year moved into the house in Surrey where the contents of Granny's Kitchen Cupboard were brought to light more than 50 years later.

Untertitel
A lifetime in over 100 objects