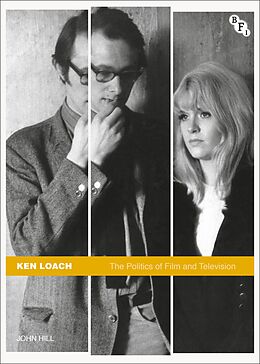 John Hill's definitive study looks at the career and work of British director Ken Loach. From his early television work (Cathy Come Home) through to landmark films (Kes) and examinations of British society (Looking For Eric) this landmark study reveals Loach as one of the great European directors.

Having spent forty years in the newspaper industry in the U.K. Africa and the Middle East, John Hill retired to take up writing on the subject of newspapers for the trade press and, with Gary Graham to co-write academic papers on newspapers and related subjects. He was for some time a Visiting Research Fellow at Manchester Business School and more recently Leeds University Business School where he lectures occasionally.

Acknowledgements.- Introduction.- Towards 'a new drama for television': Diary of a Young Man and The End of Arthur's Marriage.- 'Urgently contemporary and socially relevant': From Tap on the Shoulder to Up the Junction.- Blurring 'the distinction between fact and fiction': Cathy Come Home, In Two Minds and The Golden Vision.- 'The play of political advocacy': The Big Flame and The Rank and File.- From Television into Film: Poor Cow, Kes and Family Life.- 'This is our history': Days of Hope.- 'The UK's pre-eminent arthouse director': from television censorship to 'art cinema'.- 'It's a Free World': Social Change and Class from Riff-Raff to Looking For Eric.- What Might Have Been: Land and Freedom and The Wind that Shakes the Barley.- Select Bibliography.- Filmography.- Index.

Untertitel
The Politics of Film and Television