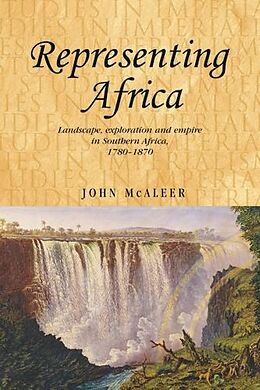 Southern Africa played a varied but vital role in Britain's maritime and imperial stories: it was one of the most intricate pieces in the British imperial strategic jigsaw, and representations of southern African landscape and maritime spaces reflect its multifaceted position. Representing Africa examines the ways in which British travellers, explorers and artists viewed southern Africa in a period of evolving and expanding British interest in the region. Drawing on a wide range of archival sources, contemporary travelogues and visual images, many of which have not previously been published in this context, this book posits landscape as a useful prism through which to view changing British attitudes towards Africa. Richly illustrated, this book will be essential reading for scholars and students interested in British, African, imperial and exploration history, art history, and landscape and environment studies.

Inhalt
List of illustrationsForewordAcknowledgementsNote on the textList of abbreviationsIntroduction1. Archiving the landscape2. 'The fairest Cape': Landscapes of convenience3. The aesthetics of landscapes4. The scientific impulse5. Missionaries and migrants6. The land in amberConclusionBibliography Index