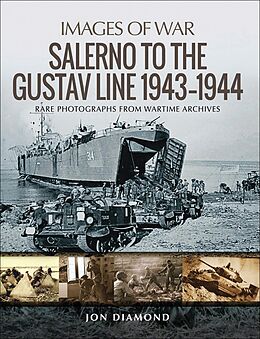 In September 1943, shortly after the conquest of Sicily, the Allied armies made amphibious assaults on the Italian Mainland at Calabria, Taranto and along the Gulf of Salerno beaches. The Italian Government quickly capitulated but the Germans fought on. Although the British XIII Corps and 1st Airbornes attacks were largely uncontested in Calabria and Taranto, the Allied Fifth Armys beachheads at Salerno underwent savage Nazi counterattacks.After Salerno, the Allied Fifth and Eighth Armies continued their advance north initially to the ports of Naples and Bari before struggling through Italian massifs, held up by a determined enemy and unfavorable ground and weather. In January 1944, the Fifth Armys X, II and French Expeditionary Corps attacked across the Garigliano and Rapido Rivers with the aim of breaking through the Gustav Line fortifications. The Nazi defense at the town of Cassino just succeeded in halting the two-week Allied attack during First Battle of Cassino and the Gustav Line was to be the scene of fierce fighting for months.

Jon Diamond MD is a kidney specialist in the USA with a deep interest in the Second World War. He is a keen collector of photographs. His Stilwell and the Chindits, War in the South Pacific, Invasion of Sicily, Invasion of the Italian Mainland: Salerno to Gustav Line, 1943-1944, Onto Rome 1944; Anzio and Victory at Cassino and Beyond Rome to the Alps; Across the Arno and Gothic Line, 1944-1945 and Op Plunder The Rhine River Crossing are all published by Pen & Sword in the Images of War series. [83]