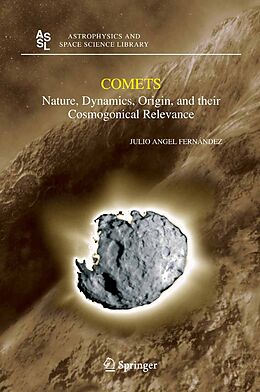 Comets are small bodies, but of great cosmic relevance. Given its pristine nature, they may preserve valuable and unique information on thechemical and physical processes that took place in theearly solar system, and that may be occurring in the formation of other planetary systems. They might have even played a very important role in the origin of life on Earth. Beyond that, since ancient times comets have inspired awe, superstition, and also curiosity anddebate. Their sudden apparitions challenged the long-held view of the immutability of the heavens, which triggered a long debate on whether comets had a heavenly or terrestrial nature. Therefore, comets have a prominent role in the history of scienti?cthought, that goes back to the most ancient civilizations. The last apparition of comet Halley in 1986 was a landmark since it arouse a great expectation in the scienti?c community and in the public at large. For the ?rst time, a ?otilla of spacecrafts visited a comet. Agreat number of popular and technical books were written on Halley, and comets in general, around the mid-eighties. The interest in comets never subsided after Halley's passage which is re?ected in the large volume of printed material on these bodies. I have taken the challenge to write a new book on comets that summarizes most of the recent advances on thesubject, including my own workdeveloped during the last 25 years.

Inhalt
Early Ideas about Comets.- Statistics of Cometary Orbits and Magnitudes.- The Understanding of Their Physical Nature.- Dynamics of LP Comets Entering the Inner Planetary Region.- The Oort Cloud.- The Flux of New Comets: Quiescent and Excited Stages.- The Jupiter Family.- The Trans-Neptunian Belt.- Physical End States of Comets.- Leftovers of the Solar System Formation.- Comets and Life.