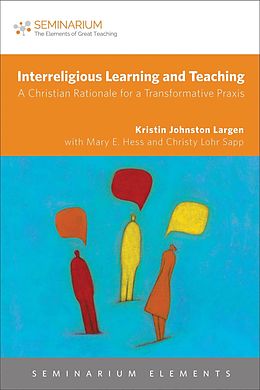 There is still resistance in Christian institutions to interreligious dialogue. Many feel that such a practice weakens Christian faith, and promotes the idea that Christianity is merely one among many different religious options. When it comes to higher education, there is the fear that both college and seminary students will "lose their faith" if they are invited to study other religious traditions from a positive perspective.

Unfortunately, this attitude belies the current culture in which we live, which constantly exposes us to the beliefs and practices of others. Kristin Johnston Largen sees this setting as an opportunity and seeks to provide not only the theological grounding for such a position but also some practical advice on how both to teach and live out this conviction in a way that promotes greater understanding and respect for others and engenders a deeper appreciation of one's own faith tradition.

Largen's synopsis of interreligious education and suggested action includes contributions by Mary Hess and Christy Lohr Sapp. Hess and Sapp provide practical commentary regarding the successful implementation of Largen's proposed approach. As a group, Largen, Hess, and Sapp create a text that extends pedagogical innovation in inspiring but practical ways.

Untertitel
A Christian Rationale for a Transformative Praxis