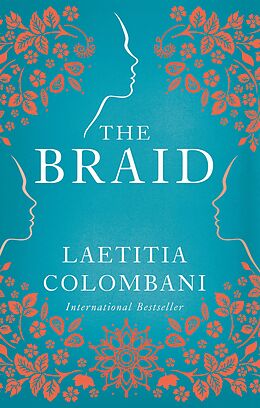 'A beautifully written novel of determination, bravery, and hope. You will remember Smita, Giulia, and Sarah long after you've read their stories.' AJ Pearce, author of Dear Mrs Bird

In India, Smita is an untouchable. She dreams of giving her young daughter an education and will go to any length to make that happen, including leaving behind all she knows in search of a better future.

In Sicily, Giulia works in her father's wig workshop, the last of its kind in Palermo. When her father is the victim of a serious accident, she discovers that her family's livelihood is at stake.

In Canada, Sarah is a twice-divorced mother of three children and a successful lawyer whose identity is wrapped up in her work. Just as she expects the promotion she's been working her entire career for, she learns she has breast cancer.

The Braid is a vibrant and singular reminder of what connects us all - across borders, across languages, across cultures.

'Laetitia Colombani is master at the art of storytelling.' Le Monde

'We truly loved reading this beautiful, simple novel in one sitting.' - ELLE

Smita, Giulia, Sarah: three lives, three continents, three women with nothing in common, but nevertheless bound by a rare expression of courage - like three strands in a braid.

India. Smita is an untouchable, married to a 'rat-hunter', her job to clean with her bare hands the village latrines, just like her mother before her. Her dream is to see her daughter escape this same fate, and learn to read. When this hope is shattered, she takes matters into her own hands, despite her husband's warnings, despite the odds stacked against her . . .

Sicily. Giulia is a worker in her father's wig workshop, the last of its kind in Palermo. She classifies, washes, bleaches, and dyes the hair provided by the city's hairdressers. When her father is the victim of a serious accident, she quickly discovers her family have been living a lie . . .

Canada. Sarah is a successful lawyer. As a twice-divorced mother of three children, she ploughs through cases at breakneck speed. Just as she is about to be promoted, she learns she has breast cancer. Her seemingly perfect existence begins to show its cracks . . .

Laetitia Colombani's The Braid is the powerfully moving story of three women's courage in the face of adversity.