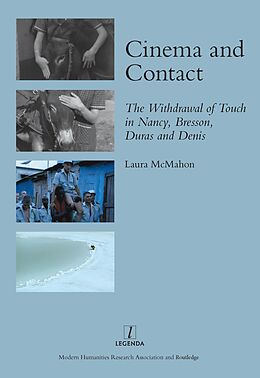 Drawing on the work of contemporary French philosopher Jean-Luc Nancy, Cinema and Contact investigates the aesthe-tics and politics of touch in the cinema of three of the most prominent and distinctive filmmakers to have emerged in France during the last fifty years: Robert Bresson, Marguerite Duras and Claire Denis. Countering the domi-nant critical account of touch elaborated by recent models of embodied spectatorship, this book argues that cinema offers a privileged space for understanding touch in terms of spacing and withdrawal rather than immediacy and continuity. Such a deconstructive configuration of touch is shown here to have far-reaching implications, inviting an innovative rethinking of politics, aesthetics and theology via the textures of cinema. The first study to bring the thought of Nancy into sustained dialogue with a series of detailed analyses of films, Cinema and Contact also forges new interpretative perspectives on Bresson, Duras and Denis, tracing a compelling two-way exchange between cinema and philosophy.

Untertitel
The Withdrawal of Touch in Nancy, Bresson, Duras and Denis